Easily one actress who has always been close to the top of my favorite actresses list has been Ann Sheridan. It seems impossible not to like her! She’s quick witted and snappy the way the best Warner Bros. dames were, but also sexy and intriguing like the best femme fatales. Ann Sheridan was always fun to watch and always made her parts better than other actresses could have. How many actors have stolen movies completely from larger-than-life personalities like Bette Davis and James Cagney? To top it all off, beneath her oomph seemed to always have a glimmer of a real woman, not a phony. She seemed genuine when she acted and in person as her newsreels, previews, and bloopers show. Ann Sheridan had personality with a capital P and that radiated in every role she played no matter how small or how ordinary it was on paper.

Sheridan started out in lots of bits and uncredited work stretching back to 1934, where she was sometimes billed as Clara Lou Sheridan. She can be glimpsed in such Paramount musicals as Search for Beauty (1934), Murder at the Vanities (1934), and Mississippi (1935) while having a few lines in Ladies Should Listen (1934) and playing a slave girl at the beginning of The Crusades (1935). Even in the background, something about her stood out. In fact, when the murder plot is unfolded in Murder at the Vanities, you can read Sheridan in the background’s lips say, “I knew it!” That’s our Annie! After having some supporting roles at Paramount, such as playing the nurse in The Glass Key (1935) with future leading man George Raft, she smartly moved over to Warner Bros. where she was better suited as their type of leading lady and better roles landed in her lap.

By 1937, she was being built up in some solid “B” entries at the studio and in supporting roles in “A” productions. She stood out best when she got to be brassy and funny, kind of like a glamour girl version of Glenda Farrell, in such pictures as Cowboy from Brooklyn (1938), although she still felt underused. When the studio finally gave her some “oomph” and she got to be sultry as well as hilarious, the true Sheridan came out. Broadway Musketeers (1938) is probably the earliest example of a true Sheridan role as she gets to be kind and understanding while also being alluring (she even strips in one scene!) in a reprise of Joan Blondell’s role from Three on a Match (1932). She also got to prove herself as a capable and reliable leading lady with some punches in Angels With Dirty Faces (1938) with James Cagney and Castle on the Hudson (1940) with John Garfield. 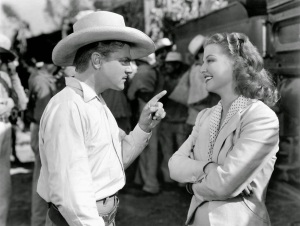 The 1940s would prove to be Sheridan’s best decade for movies as she made some wonderful classics and even stole the show most of the time. In Torrid Zone (1940) she wisecracked and quipped like the ideal classic Warner Bros. heroine and it made everyone forget James Cagney and Pat O’Brien were also in the picture. In They Drive by Night (1940) she got to be her usual snappy self, but also proved to have some great chemistry with George Raft. In The Man Who Came to Dinner (1941) she walked away with all of her scenes as a movie star completely full of herself and has become spoiled. In Kings Row (1942) she was touching as the girl from the other side of the tracks who wins over Ronald Reagan but also must stand-by him when an operation handicaps him. In Edge of Darkness (1943) she’s part of the underground in Norway planning to get rid of the Nazis who take over their village. In Shine On Harvest Moon (1944) she plays the singing sweetheart Nora Bayes and in The Doughgirls (1944) she is hilarious as a quick lipped former chorus girl. She also got to shine in her more underrated outings and programmers like Honeymoon for Three (1941) and Juke Girl (1942). 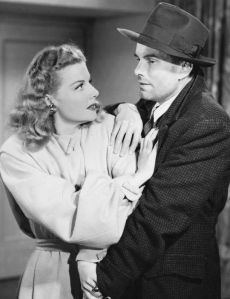 Ann Sheridan also proved to be perfectly suited as a femme fatale, something that was used not as much as it should have as Sheridan could have been an essential leading lady of noir like Veronica Lake or Ida Lupino. She did manage to make The Unfaithful (1947) and gave one of her best performances in Nora Presntiss (1947), which combined the classic Sheridan wisecracking with the sizzle of a noir femme fatale. There was also the well laid-out and proper showcase Woman on the Run (1950), which received an underwhelming release at first, but has gained an audience more recently. After making the hit I Was a Male War Bride (1949) where she performed some of her funniest scenes (like that wet paint bit!), she was somehow regulated to more routine material as the ‘50s wore on. She was even pushed into support sometimes, but always managed to steal the show and look good doing it. Ann Sheridan was both used to her advantage and not used enough depending on the time period it was. Either way she’s one of the best liked talents of her era in our house and remains a durable, beautiful, and snappy presence in all her films: big and small. 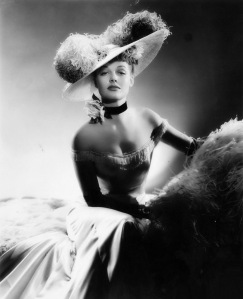 Ann Sheridan has been a favorite actress of mine since I started watching her movies when I was in high school. A while back, I even made a list of “Top 10 Actors That Deserve More Credit” about actors who aren’t forgotten but should be more remembered for their acting ability. Guess who I put in the number one spot? Yep, Miss Sheridan. She was an actress who always was able to exceed expectations and deliver more than her attractive looks would suggest. She was brilliant and as natural as can be in comedy, but she was also surprisingly good in dramatic work as well. Sheridan did it all and without looking like she was hogging the spotlight or stealing anyone’s thunder. The audience’s attention went to her but not because she mugged anything. I suppose it was that natural, easy-going style of hers that continues to make her so approachable today. This style also made me think she had to be fun off-screen as well. She certainly was as any one of the Warner Bros. blooper reels that features her shows (with that most contagious laugh of hers). Backscreen stories tell us this as well as she never took things too seriously and was able to have fun at what she did. She would joke around with her co-stars and that comradery was always there on the big screen as well. She may have been the “Oomph Girl” (a nickname she hated) but she had more than “oomph.” 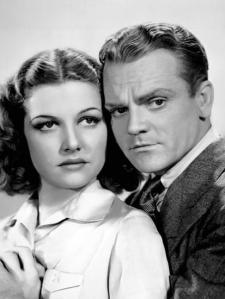 While her nickname of “The Oomph Girl” plays upon her looks, it could play upon her on-screen style as well. Sheridan was a natural-born wisecracker. In fact, I would argue she is one of the very best in the business who can stand alongside Joan Blondell and Mae West when it comes to laying them down. Before her on-screen persona was defined, Sheridan started out in bit roles. She is one of the beautiful, physically fit girls in Search for Beauty (1934) and she is easy to spot (although blink and you’ll miss her) in The Crusades (1935). She then started doing B work at Warner Bros. usually co-starring with such personalities as Humphrey Bogart (who she called “Brother Bogie” and he dubbed her “Sister Annie” after becoming friends playing siblings in San Quentin (1937)), Pat O’Brien, and John Litel. One of her first big roles came in Angels with Dirty Faces (1938) where she got to display her usual line of spunk alongside James Cagney who she was more than a match for.

Sheridan still generally made programmers even after hitting the big leagues with Cagney in Angels with Dirty Faces (1938). It could just be because I happen to really like Warner Bros. programmers, but I would say her material still gave her something worthwhile. She’s the designated sister in the enjoyable Dead End Kids movie Angels Wash Their Faces (1939), she’s a good match with John Garfield in Castle on the Hudson (1940), and she is a singer who hides gangster Humphrey Bogart or “Brother Bogie” away in It All Came True (1940). One of her best roles came when she reteamed with James Cagney in Torrid Zone (1940). When I went to see the off-Broadway show Cagney about James Cagney’s life and I met the actor who played Cagney on-stage, he asked me what my favorite Cagney film was. It was hard to pick a favorite and I didn’t want to name an obvious one, so I blurted out “I like Torrid Zone with Ann Sheridan.” He assured me he thought it was a good one too. I think it is as it always manages to make me laugh and Sheridan has some of the best zingers she ever had in this one. Still, I’m sure many Cagney fans may feel slightly different towards Torrid Zone because (let’s face it) Sheridan walks away with the movie. In Clive Hirschhorn’s review for Torrid Zone (which he liked) he stated “’Oomph girl’ Miss Sheridan did the impossible in this, her second starring role: she pilfered the acting honours [sic] from under Cagney’s hitherto unassailable nose.”

James Cagney wasn’t the only acting giant Sheridan stole a motion picture from. The Man Who Came to Dinner (1942) gives Sheridan a great role that is quite offbeat from her usual fun, laid back persona. She plays a society brat who causes a storm for Bette Davis’ secretary. While it is no small feat to steal a movie from Bette Davis, it was no secret that Sheridan was great at comedy. For a change of pace, she got to show off some serious dramatic chops in Kings Row (1942) and critics at the time didn’t think she would be able to pull it off. Those critics were silenced as Sheridan proved to be highly worthy of taking on the difficult role of a girl from the “wrong side of the tracks.” Sheridan then had a pretty balanced starring career doing both comedy and drama. She’s Jack Benny’s wife in the comedy George Washington Slept Here (1943), she’s a Norwegian citizen who can use a gun in the great war film Edge of Darkness (1943), she’s a newly wed in the comedy The Doughgirls (1944), and she’s Zachary Scott’s (another one of her co-star friends off-screen) wife in the melodrama The Unfaithful (1947). She made the film noir Nora Prentiss (1947), the western Silver River (1948), and the funny war comedy I Was a Male War Bride (1949). Opposite Cary Grant in the later, she delivers another one of my favorite lines of hers when she makes Grant climb up a sign in the pouring rain to read what it says. After he gets down, she tells him what it says: “Wet Paint.” 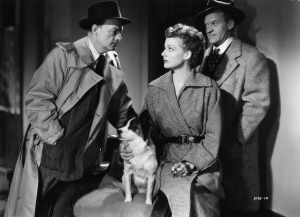 Most of Sheridan’s later works weren’t up to her 1940’s efforts, but she did score a hit at the start of the decade with Woman on the Run (1950). It is a tense, enjoyable film noir where Sheridan’s character is given some depth since she grows as the movie moves along in a plot of her trying to find her husband who ran away from the police after witnessing a murder. Without an actress of Sheridan’s surprise factor, this change wouldn’t have worked as well. She continued doing some films and TV spots until she died in 1967 at the young age of 51 due to esophageal cancer. Sheridan was a scene-stealer throughout her entire run and it is easy to see why the public always loved her. I’ll never get tired of watching her. 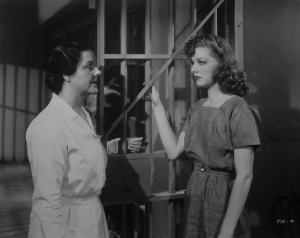 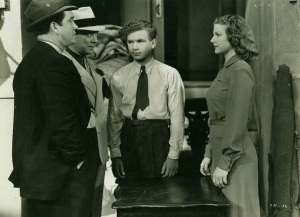 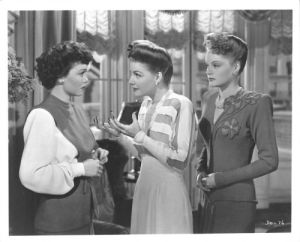